Back in December, I decided I wanted a dedicated Blu-ray player rather than use the PS4-Pro. On December 9th, I ordered a Sony UBP-X800M2. The unit is very quiet and the picture looks great at 1080. I don't yet have a 4K monitor. So, why buy a 4K player? I couldn't find a new Blu-ray player that reviewed well. Eventually I'll invest in a 4K monitor once I upgrade my video card to push 60 FPS.

After owning the player for just over a month, I've had it freeze 3 time in random spots on different Blu-ray discs. You can eject or power down. All you can do is wait for the player to turn itself off and reboot. It also doesn't remember where you left off and requires starting the entire disc over. For me, this is a showstopper. I bought this unit to do one thing only and that's play my DVD's and Blu-rays. I checked the firmware and it's the most recent version. I am running it through an HDMI switch but I don't believe it's the issue as my PS4 pro and Switch are working fine. I've also played discs for 3 hours straight without issue. I happened upon a review that I missed on Amazon from a person having the same issue. They replaced the player once and the replacement still had the same issue. It also seems the previous generation of this play was infamous for randomly freezing.

Since I'm within my return window and I doubt Sony will ever issue firmware to fix it, I'm returning it to Amazon. I've ordered Panasonic DP-UB820 to hopefully replace it. It costs more unfortunately but I just want something reliable.
Top

I've had good luck with Samsung BluRays.
- “I’m not going to get into the mind of Donald Trump, because I don’t think there’s a whole lot of space there…. I think he’s a kook. I think he’s crazy. I think he’s unfit for office.” - Sen. Lindsey Graham 2015

I like Samsung too but they stopped releasing players in the US last year. I didn't see one except through third party sellers. One perk of buying through Amazon is the return window.

There's not many manufacturers left. Streaming is killing the physical market. LG makes players but the reviews I saw weren't favorable. Oppo used to make a universal player but they are out of the market. The remaining players are going for almost $2K. Pioneer makes an Elite Universal player which I'd like to own but don't want to pay the $1k premium to own. Cambridge makes one but it costs $800.

The Panasonic I've ordered is $500 which I think is a bit much. However, I'm hoping to have it for a while.
Top

I left a review on Sony's page and got a followup. Note that Erin linked me to the troubleshooting steps for the X700. I looked at these steps and don't think holding the power button for 10 seconds is an acceptable solution to a player randomly freezing. I did check the firmware for the X800M2 before I decided to return it. They haven't updated it since May 2019. Likely, they never will fix this issue. 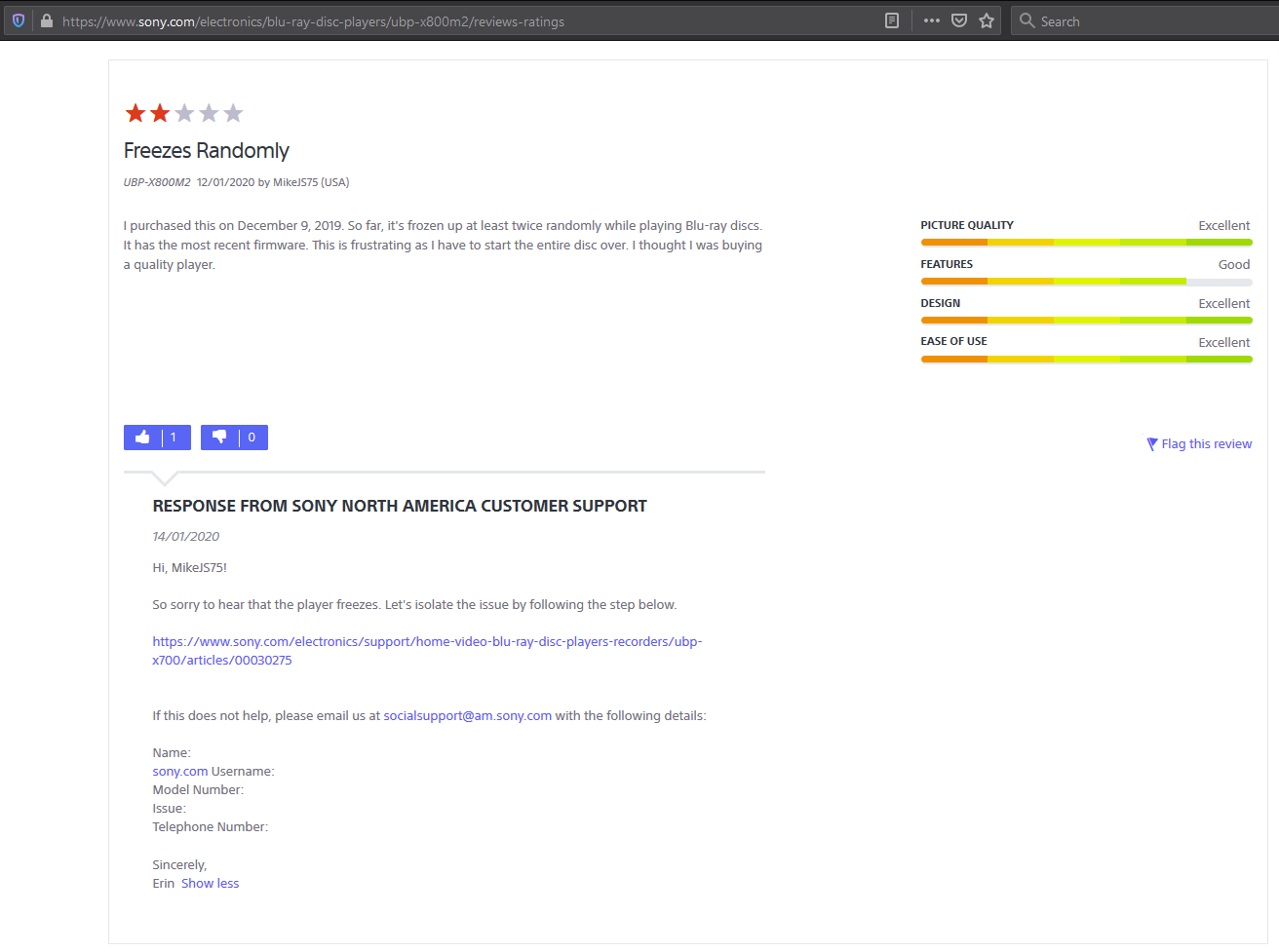 I'm guessing you're emailing them with a follow-up?
Top

I did email them stating that I was disappointed with the quality. I also pointed out that the Firmware hasn't been updated on their website since May 2018 and I wasn't confident it was ever going to be resolved. I included the model and manufacturer of the player i was replacing it with.

They send an apology and said they would forward my comments to the proper department.

The Panasonic I bought is working great so far. I feel the price should bee about $100 cheaper. The player's construction feels lighter than the Sony. It's quiet but not dead silent like the Sony. However, the Panasonic has analog outs which I may eventually hook up. It also has a front display which the Sony was lacking.
Top
Post Reply
6 posts • Page 1 of 1

Users browsing this forum: No registered users and 1 guest